Ensemble De Organographia (Gayle and Phil Neuman) performs music of the 16th and early 17th centuries on historical instruments and voice. The duo performs on a wide variety of period instruments, including early violin, recorders, cittern, sackbutts, racketts, bagpipe, tartold, krummhorns, douçaines, carnival whistles, viola da gamba, serpent, and others, many of which were made by the Neumans themselves.  Repertoire includes frottole, carnival songs from Florence (some of which are advertisements for a guild of scribes, cardoon growers, and others), English country dance tunes with violin and cittern, and bicinia by composers such as Orlande de Lassus, Thomas Morley, Georg Rhaw, and Claude Le Jeune.  Music performance is interspersed with informative and sometimes humorous commentary about the music, text, composers, or musicians of the era. 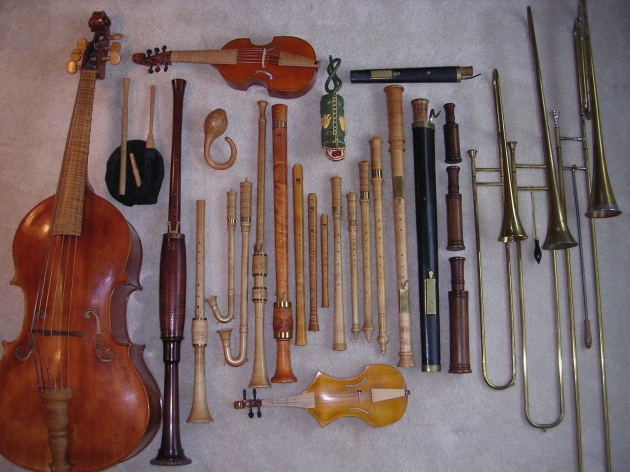 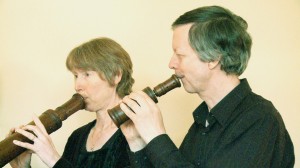 Gayle and Phil playing the great bass and tenor/alt racketts

“There’s nothing quite like an old-timey Christmas, and to take you back, back, back… to the 16th Century, you only need to listen to a new album called “Now make we joye.” Phil and Gayle Neuman lead members of Ensemble De Organographia and the Oregon Renaissance Band in the 24 pieces in this recording. Most selections are short – from 30 seconds to six minutes – but each one has a different flavor. That’s due primarily to the combinations of unique Renaissance-era instruments that are used, including those with terrific names, such as ayacachtli, tartold, rackett, violone, shawm, sopranino Schnitzer schreierpfeif, krummhorns, douçaine, cornamusen, Praetorius schreierpfeif, curtal, spinettino, and, of course, the marvelous sackbutt. All are assembled in a picture that accompanies the liner notes, and astoundingly enough, most were built by the Neumans.

The CD has a delightful mix of fast and slow tunes, and some feature the silky smooth soprano of Gayle Neuman. Unless you are cozy with the Renaissance repertoire, most of the tunes will be new to your ears; however, you will certainly recognize a few in their original forms like Michael Praetorius’s “Psallite unigenito,” “In dulci jubilo,” “En natus est Emanuel” (played on the spinettino), “Es ist ein Ros’ entsprungen,” and “Uns ist ein Kindelein, and Thoinot Arbeau’s peppy “Branle de l’Official.”

“Now make we joye” ends with three terrific Renaissance-era numbers: “Hanacpachap cussicuinin,” considered the first piece of polyphony published in the western hemisphere (Peru – author anonymous), “Xicochi, xicochi conetzintle” by Gaspar Fernandes, a Portuguese composer and organist active in the cathedrals of Guatemala and Mexico, and “Dios itlaçonantzine” by Hernando Franco, a Spanish composer, who was mainly active in Guatemala and Mexico. They are evocatively sung by Gayle Neuman, whose voice is wonderfully accompanied by some of the exotic instruments.”
– Oregon Music News